As we all know, blockchain is a disruptive technology that has helped us find new efficiencies in our lives. For example, prior to Bitcoin, creation of new currency required wasteful processes like digging gold out of the ground or printing paper currency. Bitcoin replaces that with cheap electricity. The world is better off for the reduced resource usage. Efficiency!

More industries are beginning to adopt various blockchain solutions to solve common problems. These are creating synergies in enterprises and forming new markets. But so far, blockchain has been used almost exclusively to solve industrial and financial systems issues. Today, I'm happy to introduce a new blockchain technology aimed at solving problems faced by everyday users.

It's a perennial issue, with a huge economic impact (detailed below). We estimate that in addition to the massive economic impact, the emotional and psychological damage may even be the larger factor.

I'm talking, of course, about mismatched and lost socks. While "the dryer ate my socks" is a common term, we have in fact identified multiple related but separable subproblems:

This is in fact just the tip of the iceberg. We fully believe there may be at least 13 further classifications of sock-related inefficiencies. Based just upon our current knowledge, we have calculated the following impacts:

As you can see, sock sorting accounts for easily the greatest modern crisis known to humankind.

But further than this is the emotional and psychological harm caused by these situations. We estimate 1 in 4 divorces are caused by mismatched socks. 3 in 10 children will wear a mismatched pair of socks to school at least once per month, with a 27% chance of cyberbullying as a result. 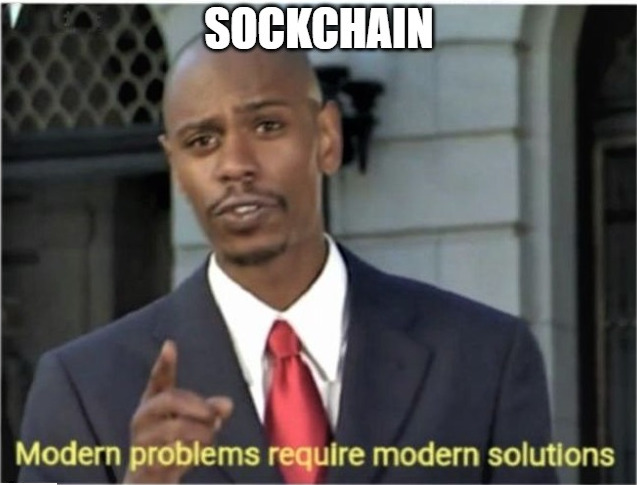 The sockchain is the natural, obvious, and modern solution to this problem. We leverage our novel Proof-of-Work/Proof-of-Stake hybrid technology to create a distributed application that uses Near Field Communication (NFC) to tag each pair of socks. Dryers throughout the world can easily and cheaply be outfitted with NFC detectors. Miners will be able to detect the presence of such socks in distributed drying systems, and provide a searchable, distributed ledger of sock-pair-locations (SPLs).

Our fee incentive structure will guarantee payment of at least 2 socks-pairs/block, leading to economies of scale. The fee structure will appropriately respond to the evolving and dynamic socketplace.

We envision further development as well. Already, some of our partners are embedded fungus detection systems within our NFCs for athlete's foot elimination, dealing with yet another worldwide pandemic.

It's right to question the costs of such endeavors. As mentioned above, the average labor cost per year currently is 1.3 billion person years. Even taking a modest estimate of $150/hour of labor, we end up with an average cost per year of nearly two quadrillion dollars, which is almost the marketcap of Bitcoin itself.

We estimate 80 billion active pairs of socks worldwide. At an NFC cost of $20 per pair, we end up with a modest hardware cost of $1.6 trillion, an easily affordable expense given the current human impact. Outfitting the dryers will cost an additional $50 trillion. And we estimate that electricity costs for our novel Proof of Work system to be no greater than $100 trillion. Including training, marketing, and our very slim administrative expenses, the project will cost approximately $300 trillion. Compared to the current cost of $2 quadrillion, we're looking at an 85% cost savings.

It would be inhumane not to undertake such a project.